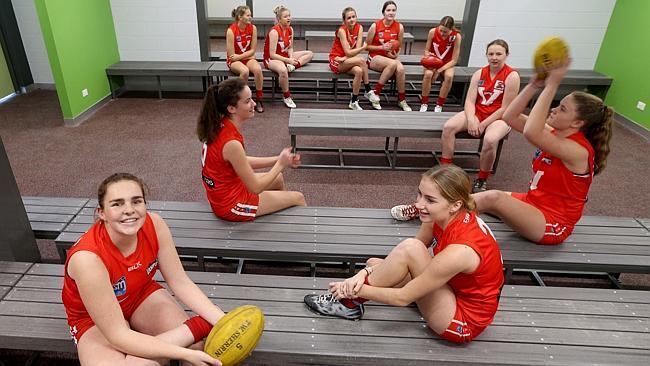 The new pavilion at Hurlingham Park in East Brighton was unveiled on August 11, with changerooms suitable for both males and females.

The $2.7 million facility was part of the council’s pledge to upgrade sporting centres across the municipality to provide for huge numbers of women in grassroots sport.

It has opened 21 months after Leader launched The Grass Ceiling, a campaign to create a level playing field for girls and women in community sport.

Girls from the East Brighton Vampires told the Leader they were ecstatic about their new home ground and pavilion.

Player Steph Oswald said they were happy to have a home ground they wouldn’t be embarrassed by. “We don’t look trashy anymore ... we have our facilities looking good and it makes us look good too,” the teenager said.

Kristal Lugosi said she was “very excited” to have facilities that were “neat, clean, modern” and “smelled new”.

Another Vampires player, Imogen Pym, only joined the team two months ago and said she had heard how bad the old changerooms were.

“These are pretty awesome compared to the old ones which looked pretty crummy,” the 17-year-old said.

The youth girls coach Rebecca Ticli said it was terrific the girls had suitable changerooms and facilities at their home ground.

She said the improved facilities would “certainly” enable growth of girls sport in the area.

Despite Bayside’s female participation in organised sport increasing every year, teams struggled with a lack of facilities, courts and grounds.

Some codes were forced to turn away eager players because of the poor condition or absence of appropriate facilities.

Bayside Mayor James Long said the council had been “very active” in promoting better sports facilities for women and girls.

“The wonderful new pavilion is equipped with female friendly, accessible facilities to accommodate the growing number of young sportspeople and girls in particular,” Cr Long said.

The council plans to upgrade 26 sporting pavilions across the municipality in the next nine years as part of $25.3 sporting infrastructure program.

Currently, only two have female-friendly facilities.

Former mayor and councillor Felicity Frederico said the pavilion was just the first in a series of female-friendly redevelopments.

“It is fantastic we have made a start and we had to start somewhere,” she said.

“It wouldn’t have happened without Leader’s support,” she said.

Ms Frederico said the community was “absolutely” behind plans to redevelop pavilions and facilities.

“The community is saying why should our girls have to accept second best.”

She said females in sport wanted and deserved to have the same opportunities as males.