Breaking through barriers to lead the SMJFL 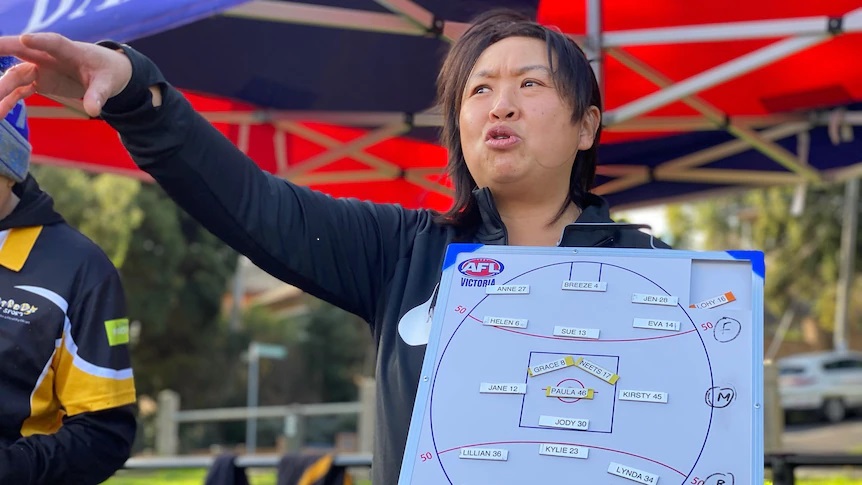 When Sarah Loh arrived in Australia in 1977 her Chinese mum gave her some advice: the best way to assimilate was through sport.

"So having two older brothers we just played cricket in summer … and when it came to winter we played football, because that's what Aussie kids did and we just didn't think anything different," she said.

She dreamt of one day playing AFL for her new favourite team, St Kilda.

"I didn't know that as a girl you couldn't play football, let alone being Chinese or anything else, they're just all the added extra layers," she said.

Those "layers" meant Sarah's dad was reluctant to take his kids to the footy.

"We were stared at. We were ostracized," she said.

"No one would stand near us. We were called every name underneath the sun."

Ms Loh has since spent more than three decades in sport management.

She's been a multicultural ambassador, played local footy (for the St Kilda Sharks) and coaches a women's masters side, the Waverley Warriors.

And despite much change in the sport industry, her biggest challenge arrived in 2016 when she took over as CEO of the South Metro Junior Football League — one of the biggest junior sport competitions in Australia.

She became the first female CEO of an AFL league, but immediately faced loaded questions.

"She's just never been in football, so how can she do this job?" Ms Loh recalled.

"I would take that subtly as, she's female and it's probably because she's from a multicultural background, what would she know about our sport.

"I haven't been called anything to my face but it's definitely been said behind my back.

Victoria University surveyed 221 diverse women who were current and former coaches, managers and board members and found:

"I usually say that a woman of colour faces the double-glazed glass ceiling," said lawyer Molina Asthana, who has sat on boards and served as a multicultural ambassador across different sporting codes.

"We are under-represented. We have to work much, much harder than women of Anglo-Saxon background to be noticed. Our achievements are always downplayed."

Lead researcher Clare Hanlon said some women felt they were tokenistic to an organisation.

"Women also felt that they were there just for the sake of statistics, rather than being there for the voice of other women," Professor Hanlon said.

A guide for change

In a bid to create change, Victoria University has developed a guide for both grassroots and elite sporting organisations, including strategies to call out racism and a boys club mentality.

"We need to create a welcoming and inclusive environment. We need to increase the visibility of women as leaders from culturally diverse backgrounds," Professor Hanlon said.

"That could include involving them in strategic decision making to showcase [as] an organisation that we just don't comprise of traditional white men and women as leaders, to be able to appoint women from culturally diverse backgrounds in roles all across sport, not just in diversity and inclusion."

Ms Asthana, who participated in the survey, said sporting organisations must give visibility to women of colour.

"People need to see role models to be able to follow in in somebody's footsteps," she said.

"We don't want to be tokenistic, we actually want to be known for the work that we do.

"I think it's really about consciously dismantling the existing structures."

Ms Loh said while it was a tough industry to break into and survive, leading by example was key.

"I always say you can't be what you can't see," she said.

"So for anyone else that is a young girl wanting to play football, it's wonderful because there's AFLW. But how about everyone else?"

In the junior league Ms Loh runs there are 34 female coaches out of 1,000. None are of colour.

"When you're looking at AFL the representation is not there in multiculturalism," she said.

"And only now in the AFLW. It's wonderful you can see females but we're kind of breaking this up into females and multiculturalism.

"So, we've done the female space. How do we get more multicultural kids and adults playing or even volunteering?"